Guinea: 22 March 2020 Legislative elections and referendum on a constitutional reform 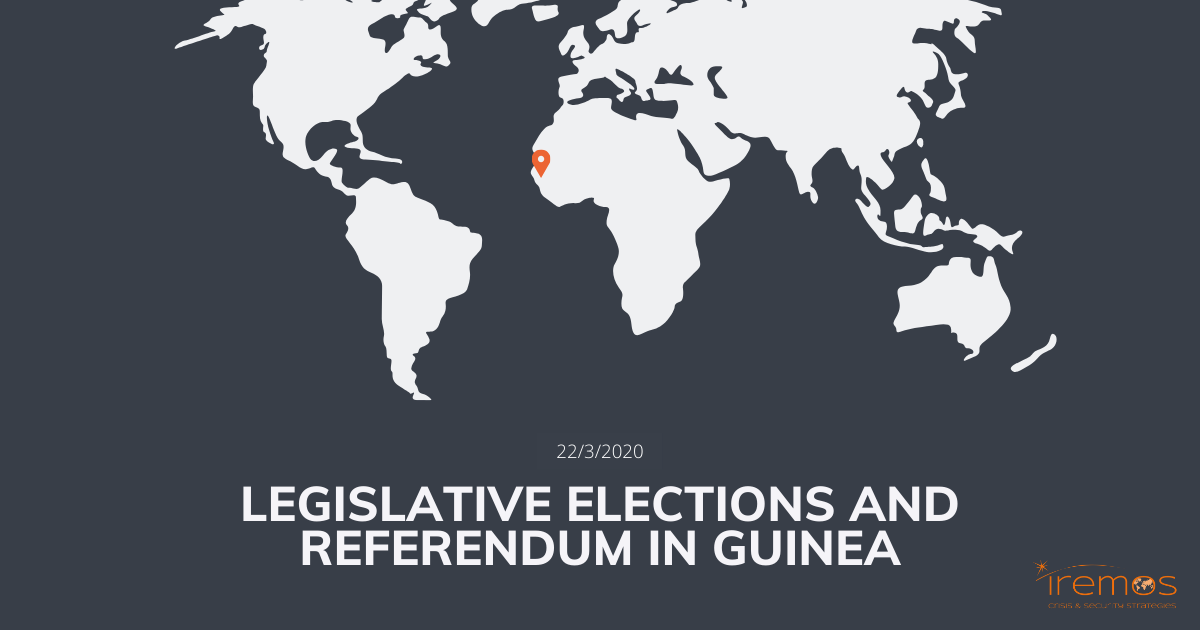 [Update] Elections were finally held on 22 March, after being postponed twice since 1 March. The analysis remains the same, and the security concerns about the polls were confirmed as the election day was marred with violent incidents across the country.

While the opposition, including the National Front for the Defence of the Constitution (FNDC), boycotted the elections, many demonstrators took the streets, causing clashes with the police, who used force. At least 10 people were reportedly killed and many others injured, some of them by live ammunition. Polling stations were ransacked and election materials were set on fire. The unrest, which was mainly concentrated in Conakry and its suburbs (Ratoma, Cosa, Hamdallaye, Dar-es-salam and Lambanyi), also took place in Mamou (center of the country), in Boké (West), and in N'Zérékoré (South-East), one of the opposition strongholds.

While further demonstrations are expected in the coming weeks, the country could be plunged into a political crisis in the event of controversial results and suspicions of electoral fraud conveyed by the FNDC.

On 1 March 2020, a double election process will unfold in Guinea: both the parliamentary elections, initially scheduled on 16 February 2020, and the referendum on a constitutional reform will be held on the same day, in a particularly tense sociopolitical climate.

President Alpha Condé, elected in 2010 and reelected in 2015, should technically step down, as the 2010 constitution allows a maximum of two presidential mandates. Yet, over the past months, he has been instilling the idea of a change to the constitution which would allow him to run for a third term at the upcoming presidential elections (presumably scheduled in October 2020). In April 2019, Guinean main opposition parties[1] and civil society organizations created a coalition called the National Front for the Defense of the Constitution (Front national pour la défense de la constitution, FNDC) to mobilize forces among  the political and civil society spheres in order to prevent such reform.

Since October 2019, as the constitutional reform project moves forward[2], the FNDC has instigated regular and massive protests in Conakry and other cities such as Labé, Mamou, Boké or Nzérékoré, which have often turned violent. While the majority of the demonstrations are banned by the authorities, most of the opposition rallies have been marred with incidents involving clashes between protesters and security forces, as well as acts of vandalism and increased criminal activity. The almost systematic police crackdown has resulted in waves of arrests and acts of intimidation against opposition militants, and excessive use of force through tear gas and live ammunition fires, eventually killing more than 36 demonstrators and injuring many others. One gendarme was allegedly killed by protesters during attempts to repel the police forces, throwing stones and other projectiles at them. After a truce initiated at the end of January 2020, the FNDC convoked new demonstrations as of 12 February in order to reiterate their discontent and further call upon its militants to boycott the legislative elections. While the campaign officially started on 14 January, none of the FNDC candidates are enlisted, and only few electoral lists have been publicly displayed in the prefectures. On 4 February, the announcement of the combination of the legislative elections and the referendum vote sparked further outrage from Alpha Condé’s detractors, who denounce this manoeuvre as a trick to get more people to the polls and as a “constitutional coup d’Etat”.

These upcoming polls raise concerns, not only about security but also in terms of organization. Initially scheduled on 28 December 2019 and then on 16 February 2020, the second report of the legislative elections highlights the difficulties faced by the Independent National Electoral Commission (Ceni) to keep its electoral calendar and to ensure the smooth running of fair and transparent elections.

History of political violence in Guinea 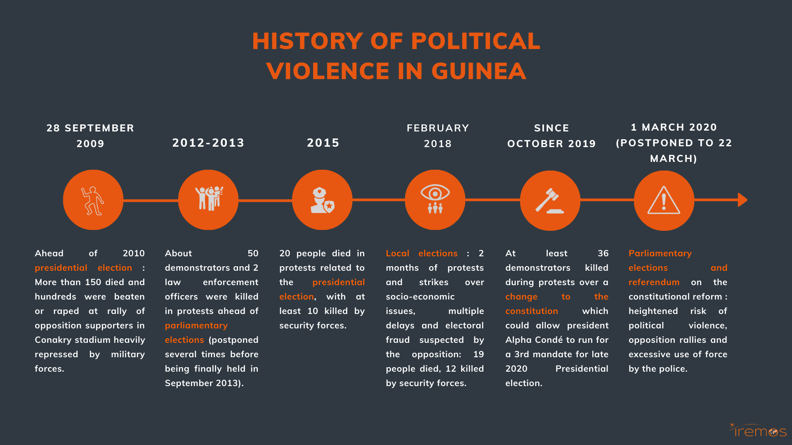 Guinea has a long history of political violence, partly due to the lack of democratic experience after decades of despotism under Sékou Touré (1958-1984) and years of military rule embodied by Lansana Conté (1984-2008). Even since the consolidation of the democratic process, periods of electoral campaigns, and political competition between the ruling party and the opposition, have regularly resulted in violent incidents. The current political landscape is inherited from years of unilateralism, corruption and impunity (especially regarding security forces).

Despite multiparty presidential elections held in 1993, the power belonged to the military for 24 years under Lieutenant Colonel Lansana Conté, who took office in 1984 after a coup. When he died in December 2008, military officers orchestrated a successful military coup, promising to hold elections within two years. The coup leader Captain Camara instilled rumors about running for the 2010 presidential election though he promised not to do so. This generated widespread discontent among the opposition, who mounted a massive rally against the military leader in Conakry Stadium that ended in a massacre and later found as a “crime against humanity” by the ICC.

While the presidential election in 2010 was deemed democratic and legitimate, and showed the victory of a longtime opposition leader -Alpha Condé, leader of the Rally of the Guinean Party (RPG) party- political instability quickly resurfaced amidst ethnic tensions. Acts of intimidations and violence directed at voters, and particularly supporters of the UFDG, unveiled ethnic division. Indeed, while the ruling party (RPG) is mainly composed of the Malinké ethnic group, the UFDG is dominated by Fulani. Targeted actions against this community in the country’s eastern region allegedly led to the displacement of hundreds of Fulani. Alpha Condé was further accused of promoting his own ethnic group, awarding them government posts at the expense to other communities.

A new wave of anti-government protest unfolded in 2013, following delays in holding legislative elections, which were supposed to take place within the 6 months after the 2010 presidential polls. Postponed multiple times over organizational matters, parliamentary elections were eventually scheduled on 28 September 2013. While the ruling party won a majority of seats, the opposition appealed to the Court, denouncing fraud. The electoral campaign fueled sporadic protests and brought about violence between partisans: at least 50 demonstrators and 2 law enforcement officers were killed.

While 2015 presidential elections were uncontested as Condé was largely expected to win, some abuses and violence were nonetheless recorded: 20 people died, with at least 10 people killed by the police.

As for the parliamentary elections, local elections had been postponed since 2010 before being held on 4 February 2018. No major incident was reported on the voting day, but the results were contested by the UFDG, accusing once again the ruling party of electoral fraud. Tensions quickly escalated. Besides political unrest, general discontent was being felt across the country as the population suffered from poor socio-economic conditions. For two months, strikes and demonstrations took place on a regular basis, resulting in street clashes and confrontations with the police, and the death of at least 19 protesters. Alongside popular unrest, security forces misconducts, including looting, thefts and extortion, were reported.

Considering this history of political violence during electoral processes, security concerns over the upcoming polls are legitimately raised. Several factors of violence are to monitor closely ahead of 1 March and after the publication of the results of both the referendum and the parliamentary elections. The results of these elections will be critical for the presidential race in late 2020, which could be plagued by political turmoil and violent unrest if Condé actually succeeds to run for a third mandate.

Several factors of violence to watch for the upcoming polls:

>>> Read our article about Sensitive elections in 2020

- When possible, defer non-essential travel during the whole electoral process.

If travel to Guinea during election period is business-critical:

- Exercise increased vigilance throughout the entire duration of the trip, particularly around state and security buildings, as well as around places of worship, and in public and crowded areas.

- Keep regularly informed of the situation through social media and local media outlets.

- Keep away from any gatherings or crowd movements, which could quickly escalate into violence. These include political rallies and opposition demonstrations during campaigning and crowding at polling stations on the voting day. Avoid movements as much as possible on the voting day (1 March).

- In case of involuntary involvement in a demonstration or rally, leave as quickly and calmly as possible and do not approach law enforcement officials, who could misinterpret the gesture. Avoid the vicinity of police squads, who may lead indiscriminate and violent actions to disperse the crowds (including bystanders).

- Anticipate traffic disruptions and increased security around gatherings. Find out about blocked roads and identify alternative routes. Anticipate travel well in advance, especially to get to important appointments or to the airport.

- Remain neutral in all circumstances in terms of political orientation. Refrain from discussing local tensions or the elections, especially in public areas or on social media.

[2] Officially confirmed by Alpha Condé on 19 December, the reform project extends the presidential term in office from 5 to 6 years, renewable once.