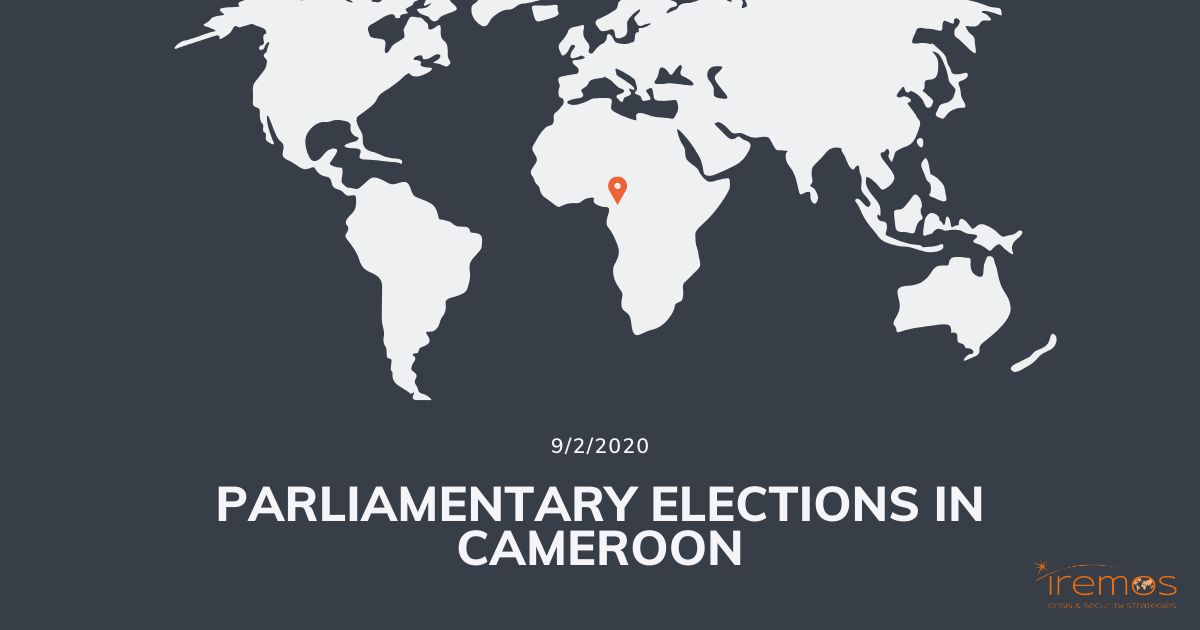 Since 2017, the English-speaking regions (Northwest and Southwest) are caught in the middle of a battleground between the official army and rebels seeking independence and the formation of a state called Ambazonia. While security forces and state officials are the main targets of attacks from separatist groups, civilians have increasingly been victims of exactions and violence from both sides. Public buildings such as schools and hospitals have indeed been targeted. More than 3 000 people have been killed and more than half a million are displaced. What began as peaceful protests to denounce the marginalization of the Anglophone regions has now descended into generalized violence, and with atrocities committed on a regular basis.

Parliamentary and local elections were supposed to be held in 2018 but were postponed twice by President Paul Biya due to security concerns. 700 additional military troops have been deployed in the Anglophone regions ahead of the poll.

In an attempt to ease the tensions, a mediation process was initiated in June 2019 on behalf of Switzerland. On 20 December, the Cameroonian parliament granted the Anglophone regions a special status. It aims at improving bilingualism, providing greater powers for Anglophone elected officials and greater autonomy in the implementation of public policies (e.g. education and justice).

Despite the special status, separatists have rejected the upcoming electoral process and vowed to prevent its unfolding. The following series of incidents prove their willingness to disrupt the polls:

During lockdown or “ghost towns” operations, civilians are particularly at risk.

As armed clashes with security forces are likely to erupt, the population may be caught in crossfires. Anyone bypassing the order on movement restrictions could be directly endangered. Risks of aggressions and kidnappings during this time are particularly high.

Besides the separatist challenge, the main opposition party, Movement for the Rebirth of Cameroon (MRC), led by Maurice Kamto, has called for the boycott of the 9 February elections. The opposition figure was arrested in January 2019 after leading a protest movement contesting the results of the October 2018 presidential elections won by Paul Biya. Accused of insurrection, hostility to the motherland and rebellion, Kamto was eventually released from prison in October 2019, as a conciliatory gesture from the President.

While this boycott call will further reduce the number of voters, the election could spark partisanship violence between opposition militants and Biya’s party supporters. Opposition rallies or gathering around poll stations should not be ruled out, especially in Yaoundé, Douala, and Bafoussam. Previous peaceful protests have been marred with repression from police forces, including massive arrests, firing tear gas and live ammunition. Opposition demonstrations are likely to be banned by the authorities or placed under strict security vigilance.

Terrorism in the North and Far North:

Two Nigerian-based terrorist groups operate in the North and Far North of the country: Boko Haram and the Islamic State in West Africa Provinces, a splinter of the former. These groups have taken advantage of the porous border with Nigeria and the lack of security forces presence to increasingly gain ground in these regions. Moreover, the lack of economic opportunity, poor conditions of living and marginalization in the Far North have provided the Islamist militants with a recruitment base in some villages.  Kidnappings, suicide bombings, ambushes and targeted killings have therefore been on the rise and tend to become more indiscriminate, affecting both security forces and civilians.

The risk of terrorist attacks during elections is higher, as it aims at disrupting government stability. While the security presence will be heightened, army and police officers may be ambushed at checkpoints or during patrolling. As elections bring about crowded situations, poll stations and public spaces may be privileged places for targeted attacks against civilians or local state officials.

- Where possible, defer non-essential travel to the rest of the country at least until after the election.

If travel to Cameroon during election period is business-critical,

- Exercise increased vigilance throughout the entire duration of the trip.

- Be particularly vigilant around state and security buildings, as well as around places of worship, and in public and crowded areas.

- Keep regularly informed of the situation through social media and local media outlets.

- Keep away from any gatherings or crowd movements, which could quickly escalate into violence. These include political rallies and opposition demonstrations during campaigning and crowding at polling stations on the voting day.

- Anticipate traffic disruptions and increased security around gatherings. Find out about blocked roads and identify alternative routes. Anticipate travel well in advance, especially to get to important appointments or to the airport.

- In case of involuntary involvement in a demonstration or rally, leave as quickly and calmly as possible and do not approach law enforcement officials, who could misinterpret the gesture.

- Remain neutral in all circumstances in terms of political orientation. Refrain from discussing local tensions or the elections, especially in public areas or on social media.